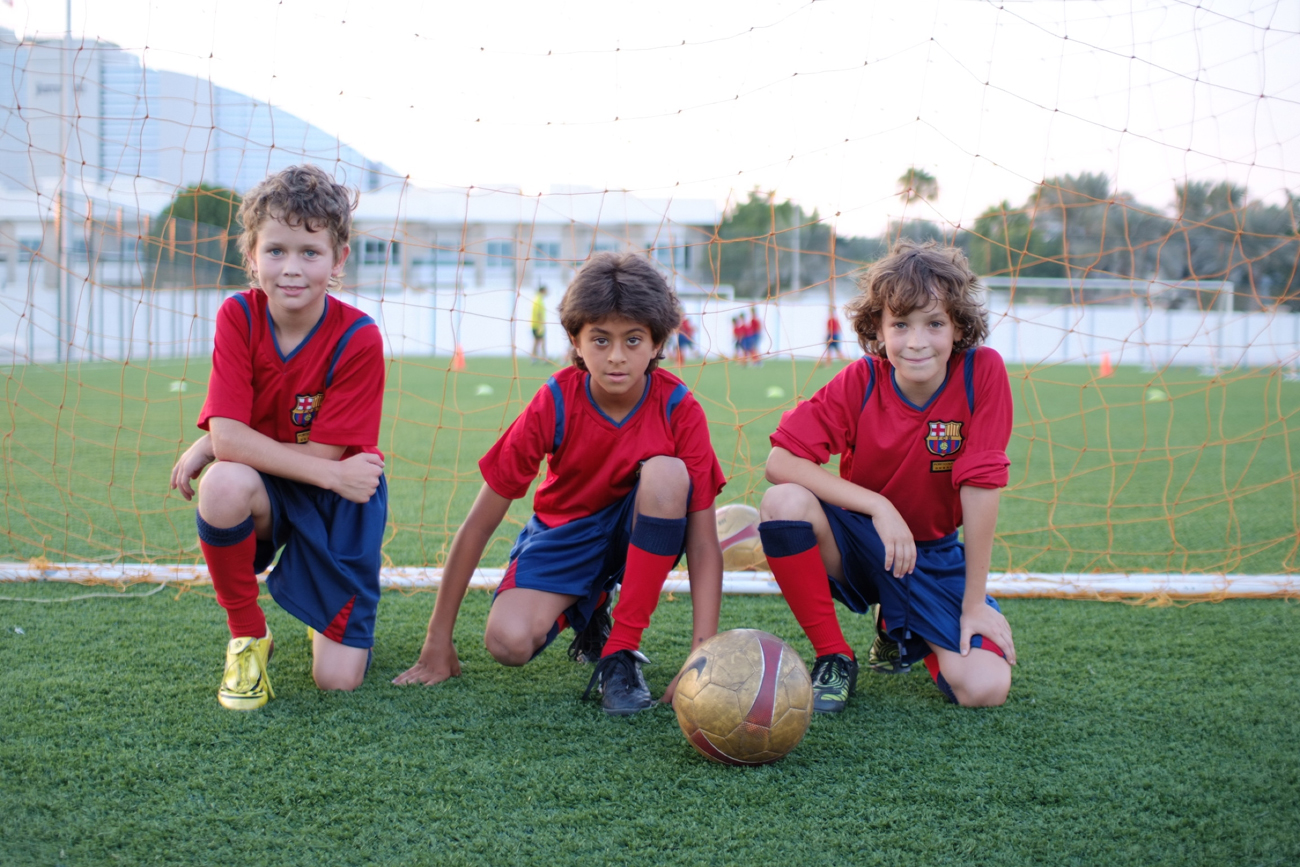 Three Dubai youngsters will shortly be cleaning off their boots, packing their kitbags and heading off on the football trip of a lifetime, after being selected to take part in an international soccer tournament TO be held in Europe.

The competition they have been invited to participate in is certainly no ordinary one, as the team they will be representing is none other than FC Barcelona; one of the greatest names in the beautiful game. The three boys were chosen for their talent at a recently opened soccer training programme, currently underway at Raffles International School, in Jumeirah. Their inclusion highlights both the cosmopolitan and rapidly expanding nature of Dubai, as all hail from different parts of the world, with one, Nicholas Kruze, having landed in the city just two months ago. Nicholas, who is aged nine, travelled with his parents from the Faroe Islands in the summer and is clearly unfazed by finding himself chosen to represent his new soccer school abroad so soon after coming to Dubai. “I’m quite excited to be going,” he said, nonchalantly.

The selection of the best of the school’s youngsters to take up places in a squad which will be visiting Poland has been an integral part of the FCBEscola programme, which is being held under the tutelage of Mr. Josep Gombau. Mr. Gombau holds the Level 3 Soccer Coaching Badge; a premier license awarded by the Catalan FA and one that entitles him to coach at all grades; from grassroots standard right up to international level.

The three youngsters who have been chosen will be part of an FC Barcelona side that is participating in a tournament with junior teams from such well known football names as Celtic, Sporting Lisbon, Lazio and Valencia. Representing the Middle East for Dubai FCBEsola at the tournament will be Adham Hamza, who is also nine years old, or, as he prefers to put it, “I’m nine-and-a-half – I’ll be ten in April.” Adham is from Egypt and has been resident in Dubai with his family for four years. The sports mad youngster is keen on all ball games and plays volleyball once a week, as well as working out regularly on the basketball court. Julian Lamadrid is the third of the students who will be flying to Spain on December 9th (?). The 10-year-old attends the JESS School at the Arabian Ranches and has been playing football for six years. Unsurprisingly, he says that his favourite team is FC Barcelona and lists swimming and gaming on his Playstation as his other favourite activities. “I feel very lucky to be chosen to go with the school, as seeing the Camp Nou is one of my dreams,” he added. Julian will be doing much more than simply seeing FC Barcelona’s iconic Camp Nou. Prior to the competition in Poland, the three youngsters will undergo further tuition at the Camp Nou Academy. They will also be invited to attend a first team training session, where they can watch superstar players such as Thierry Henri, Lionel Messi and team captain Charles Puyol. The players will doubtlessly be demonstrating the winning routines that have helped propel FC Barcelona to two UEFA Champions League Cups, four UEFA Cup Winners’ Cups and two Super European Cups. Seif Tawfik, FCBEscola manager, says that choosing the youngsters wasn’t easy, as many of the have displayed a high level of ability in both the training sessions and on the match days. “The school is very competitive and the students’ standard and commitment to the programme have been excellent,” he revealed, speaking recently at one of the evening classes. “Obviously, there was some disappointment from those who hadn’t been selected, but we encourage fair play and sportsmanship at our school and believe that these values help to prepare children for the competition that is life,” he added. There certainly didn’t seem to be any bad feeling on display during this particular session. “I’m going as well,” quipped one boy who hadn’t been selected. “I’m Julian’s manager,” he laughed..