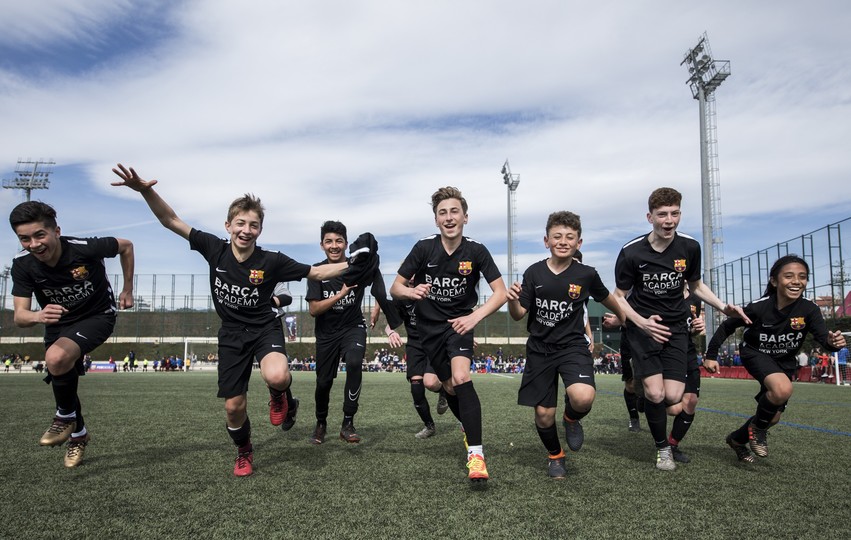 FCBEscola to be renamed Barça Academy

The new name is part of the club’s brand project, in which a more international name replaces the FCB acronym

From the 2018/19 season onwards, the project known as the FCBEscola since its creation will be renamed the Barça Academy internationally. This new name is part of the new brand project for FC Barcelona, in which the acronym FCB becomes less present and the recognition of the word ‘Barça’ is capitalised upon.

The specific denomination of ‘Academy’ was chosen to be more adaptable in the club’s strategic markets, such as the USA and Latin America.

The change will be made gradually from July 1, when the Barça Academies around the world will take on the name. It will also be accompanied by a larger variety of categories:

Barça Escola:
The word ‘Escola’ will be maintained only at the FCBEscola Barcelona. This project is the only one managed directly and exclusively by the club.

The Barça Escola helps the youth levels at the club, as it is the first place that the La Masia scouts look when selecting young boys and girls to form part of the formative categories.

Barça Academy:
The objective of the Barça Academy is to spread the FC Barcelona playing style, methodology and values around the world. The Barça Academy project takes over from the 41 International FCBEscoles and will use Local Project Directors to supervise the correct application of the methodology. A Barça Academy will especially insist on the instilling of values and the integral coaching of players. The club will establish relationships with local promotors to work together and start up the projects in each country.

Barça Academy Pro:
The Barça Academy Pro format involves football academies that will attempt to compete at the top level in each state or country. In this case, the coaches will be people who form part of FC Barcelona and have been trained as coaches at the club’s facilities. These are the club’s own projects, as they represent a large investment by FC Barcelona and play with the official kit outside of our borders. There are currently two Barça Academy Pro projects, in Haikou (China) and New York (USA).

Barça Residency Academy:
The Barça Residency Academy was created in 2017 in Casa Grande (Arizona, USA) to deal with the challenges faced in the American market and, especially, the interest from families to give their children access to the university system. This sporting residence offers the first permanent programme of its kind, combining sporting training with preparation for university studies. The players will participate wearing the club’s official kit.

The Barça Academy iis an FC Barcelona football school model aimed at boys and girls, with the main goal of integral training for alumni. This football school model, exported on an international level, will spread th Barça brand and transmit the working philosophy and values of the club around the world.

The Barça Academy affiliates will work with a unique model, based on the Barça methodology used from the lowest level through to the first team, with a creative and attacking style and the use of values: Respect, effort, humlity, abition and teamwork. The results show proven success.

FC Barcelona currently have 45 Barça Academy projects around the world, more than 180 Campuses and 50 Clinics, and a presence in 52 countries. More than 45,000 children take part in the different promoted activities.